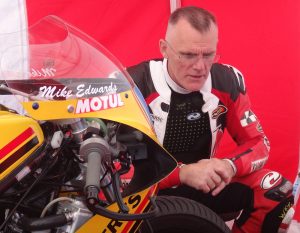 A real journeyman of motorcycle competition I’ve raced something every single year since 1982; as an International motorcycle racer, with multi British Championship titles, an FIM Euro championship, and wins on the ‘pure roads’ at the Macau GP, NorthWest 200 my credibility, history, experience, in-depth knowledge and subsequent success in this branch of motorsport runs true and deep.
I now also enjoy sharing my wealth of experience and knowledge of the sport, trying to put something back, through circuit guides, hints and tips videos and one to one on track coaching as an independent ACU certified commercial road race coach.

Click the icons below for my online media profiles, or if you would like to contact me directly, you can either phone on: 07831310865 or email me: mail@mike-edwards.net