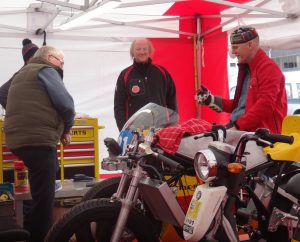 Paul Ricard was round one of the ICGP Championship in the south of France, it’s a popular circuit and one I have a good history with and

enjoy riding. I won both of the races last year going on to win the Championship so went there feeling very confident of another good result.

g in prime spot in the paddock.

Eddie had prepared a new engine with a new barrel, longer conrods and a new gearbox in last years chassis. We hadn’t had the chance to test the engine due to the weather in the UK so it was our free practice before we would know how good it was, on the dyno it had great power lower down the rev range but the torque was the big improvement to look forward to.

We arrived late Thursday evening so arranged to meet up with the team first thing Friday morning with our practice session starting at 9:55. There wouldn’t be an issue with technical inspection because Eric Saul the ICGP organiser would be in charge of that so we rolled into the paddock just before 9:00 only to see most of the ICGP competitors riding through the paddock upto the holding area as the circuit organisers had move our time slot and we didn’t know. It was a real panic to get changed, get the bike warmed up etc and I could hear the bike racing round as I was getting changed. It was only free practice but I hadn’t ridden the bike at all so didn’t want to wait until our first qualifying session before cocking my leg over the bike.

I managed to get out for a few laps and the bike felt strong in the mid range as we expected but was way over geared, plus chattering badly at the front entering corners but worse than that the gearbox was terrible, sticking in fifth and sixth and starting to

jump out of third gear, not a good start.

Ally found the gear lever was hitting the expansion pipe at full extension but it wouldn’t explain it sticking in fifth and sixth. We also found the preload on the forks needed a huge amount adding as we had nearly 60mm of sag (normally around 28mm).

Fresh fuel, tyre pressures checked and out again for our first qualifying session. The weather was cool and a wind was blowing down the Mistral straight which meant we had to change the gearing so I could use the higher gears better.

I quickly set about putting a decent lap together but the gearbox issues just got worse very rapidly, as I started lap 3 the bike would jump out of third gear ever time, so I had to over rev the motor in second and jump straight through to forth but then it was way down in the rev range making the acceleration difficult, to make matters worse still you use third gear a lot around Paul Ricard. Fifth and sixth was still sticking which didn’t help so after another few laps I pitted as I didn’t want to damage the motor. On the good side the handling was improved with the pattering easing down at the front. Amazingly I was on pole with a time of 2:2

7.82 from Ant Hart but disappointed as I knew there was a lot of speed to come.

Ally pulled out the engine and stripped the whole thing down to see what was wrong, the gearbox was a mess and un-repairable. So we made the decision to swap the engine out of the new spare chassis which ironically was the engine from Paul Ricard last year.

Because of all the swapping around using one engine, the pipes from the other engine and in another chassis, guessing the gearing we would have to wait and see how it would work in our second qualifying session.

I had to run the motor in for a couple of laps due to new pistons and as the weather was much cooler again we put some more tape on the radiator to keep the motor running at the optimum temperature. I pitted to pull a strip of tape off and checked with Ally it would b

e good to push on now. Ally reckoned it would be good so I blasted out and got my head down. The bike felt great, very slightly over geared but handling was working, motor pulled good so I pushed hard. I was really starting to enjoying myself but as I started my third lap coming out of the slow bottom corner I over cooked it and high sided throwing myself high in the air landing hard on my hands and head.

The session was stopped and I was taken back to the medical centre for a check over, by then I pulled myself together after feeling a bit battered. The medical team X-rayed my left hand as it had taken a real pasting and looked like a frog was under the skin on the back of my hand, They suspected I had broken a bone in the back of my wrist but I knew that wasn’t the real issue. My right hand was much more painful but I knew if I made too much of it they would declare me unfit to ride so after keeping me in for a hour to see how I felt they said I could ride.

Arriving back at the awning the team were relieved to see I was OK, the bike had little damage and Alli had already done most of the work to get it sorted as the first race was only an hour away. The only up side was I had posted a huge time of 2:22.82 some 5.34 seconds quicker the second placed man Ant Hart.

Both of my hands were very swollen so much in fact I couldn’t get my gloves on, I sat on the bike to see if I could grip the bars but it was very, very painful. My only hope was the adrenalin would kick in and dull the pain. Alli put my gloves on and stretched them that helped me get into them for the race, but even the ride up to the holding area was hard work.

Lights out and I made a good start running in third place behind Ant Hart and Claudio Cipriani on the Kawasaki twin, I wasn’t sure how hard I could brake and twisting the throttle was a nightmare making my gear changing slow and clumsy. Passing where I high sided I slipped under Ant and positioned myself perfectly behind Claudio onto the long Minstral straight, I knew I had to because the Kawasaki was very rapid so I needed a good tow if I was going to make a pass. I made a great corner onto the straight rocketing up behind the Kawasaki and quickly slipped passed him way before the braking area at the chicane. From then on I knew if I could stay consistent I could hold them off. Head down for a few laps I opened up a couple of seconds lead, enough for me to save my

hands on the brakes and concentrate on my gear change. Things were looking good until the penultimate lap when the bike seemed to be holding back, reluctant to rev and feeling slow. To start with I thought the motor was seizing but it would have stopped by now. I pressed on but Ant came by at a rate of knots, I tried to fight back closing up in the braking area but it wouldn’t rev out of the corners. I then focused just on getting round the last lap, short shifting keeping the revs down as much as possible but TZ’s don’t like it and it got slower and slower finally just before the back straight spluttering to a stop.

I was gutted, from what was a 25 point race win now I was 25 points back from the Championship leader. It turned out to be the battery had taken a hit during the crash and even though it was fully charged had lost its voltage.

That evening was the presentation of the 2017 Championship awards in Eric’s large awning, he put on a splendid buffet with drink and everyone had a lovely evening.

Sunday we had to wait until late in the afternoon for our second race, however my hands overnight had swelled up like balloons and it looked like the race would be a bridge too far. But I managed to get some ice packs and by the time for the race I could get my glove on again.

Ally replace the battery, checked over the bike and we kept our fingers crossed (well the team did anyway – I couldn’t)

Lights out again and I made another good start and quickly opened up a few seconds lead, but I was struggling more than race one making mistakes due to the f

act I could squeeze or twist my right wrist. I held on as long as I could but Ant slowly caught me passing on the penultimate lap into the chicane on the back straight. I fought back and thought I could hold on for another lap but he passed me on the brakes just

before the back straight, I knew if I hung onto his slip stream I could out drag him at the end of the back straight but as we approached the chicane there was a group of back markers. Ant had first bite of them (mid chicane) which split them up, I tried to duck under them on the exit and get into Ants slipstream but I lost control and didn’t have the strength to hold on and slid off. I ran back to the bike but during the fall the pinch bolts in the top and bottom yoke had broken and the left fork was completely loose so I had to retire. In hindsight it was obvious I should have settled for a safe second place but the racer in me never gives up and I thought I could do it, no fool like an old fool I guess.

Ant went on to take his second win a extend his lead to 50 points, he’ll take some catching but until that fat lady starts singing it ain’t over.

Be the first to comment on "ICGP R.1 Paul Ricard"