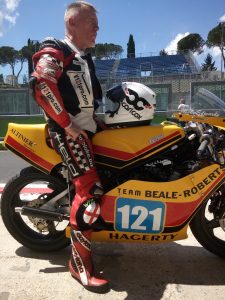 The last time I was at Valalunga was racing in the World Endurance Championship in 2005 on the Austrian Team YART Factory Yamaha in 2005; so some 13 years later I was looking forward to see what the circuit was like and if I could remember it.

Arriving at the circuit of Friday morning before our first free practice it was just like coming home as we drove through the gates. The layout was very familiar  and we quickly found Eddie and the team waiting for us in the paddock, I had to nip to the race office and book a few sessions on the test day as we had some new Pirelli tyres to try out. I had been developing them and Tomas from Pirelli had come up with a third generation tyre for us to test. The bike was 100% ready to rock and I was soon blasting out of the pits for our first session. The circuit layout had been extended with a long loop at the rear of the track and there was a new slow chicane just before the infield section towards the end of the lap. Here it was really hard work to get keep n the boil through the chicane but everywhere else the Beale-Roberts TZ was buzzing.

The tyres were a step forward too however there was still improvements to be made but Tomas was happy we had the time to test with them.

The bike was just about right too so it was we had a good starting point for Saturday first qualifying session.

The weather was really hot, up in the mid 30’s so keeping the bike cool and not staying out too long in each session killing the tyre was important.

Qualifying session one soon came around and with a gearing change to try we zoomed out of the pit lane however Richard Peers-Jones crashed on the first lap and the red flags came out. Returning to the pits before the session was restarted again, but I only got to the exit of turn two and the bike ran onto one cylinder and didn’t want to keep going so I was forced to pull over at the end of the first straight. I saw fuel pouring out of the fairing so turned the fuel off and waited for recovery, unusually not by a van but a tractor instead! It was very disappointing as I had no qualifying time. Back at the awning Ally found the inspection/access cap on the bottom of the float bowl had fallen off and was resting on top the crankcases, “never seen that before” exclaimed Eddie, “me too” I declared.

The second qualifying sessions started off good but after about 5 laps coming toward the end of a lap it lost power and went down on one cylinder. I knew it hardn’t seized I thought a plug cap had popped off which had happed before so I rolled into the pits to see what was going on. As it rolled to a stop I saw fuel gushing out of the one of the carbs, Ally turned the fuel off and started fiddling with the carb to see what the issue was. I was comfortably on pole and there wasn’t that much of the session left so I took the second bike out for a few laps to make sure it was working. Then we called it a day and returned to the awning. It turned out to be fuel float valve had unscrewed and dropped out, “never seen that before” exclaimed Eddie, “Oh yeah” I declared….

The first race was right at the end of the day on Saturday, the sun was low in the sky and it was still very hot. I got a great start but Ant out dragged me off the line into turn one but I lined him up rounding turn two and slipped past him on the next straight. I like to get to the front and clear off if possible, controlling the race from the front. The plan seemed to work and after a couple of laps I was slowly pulling away from Ian Simpson with Ant in third, Ian never gives up so I had to keep the wire tight right until the flag.

The following day it was even hotter and our race was at midday, virtually carbon copy of race one I got to the front one the first lap and this time stretched a decent lead over Ian, however Ant’s clutch started slipping and then fell off completely ending his race. Sad for him, but it was good news for me because I managed to close down his points lead by taking the win again.

Be the first to comment on "ICGP R.2 Vallelunga"