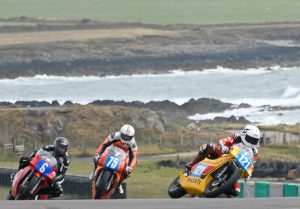 Anglesey was always going to be a tough race, after a disastrous start to the season at Paul Ricard with two DNF’s I was in a real points chase behind Ant Hart and Guillaume Foureau. I made up some ground at Vallelunga with two wins but after Oschersleben was cancelled there are only a couple of rounds to make back the deficit.

The weather on the run up to the weekend including the Friday trackday was fabulous however the forecast wasn’t looking great, when its good at Anglesey its spectacular but when its bad its very bad.

There were plenty of European riders that had made the long trip and they certainly seemed to enjoy the practice day learning the new circuit. We had been testing there a few weeks before so were pretty much good to go but I changed over the rear shock to help rear patter and we had some new K Tech forks to try and a gearing setup too, so after a few sessions I decided we had done enough.

We were stopping in a local AirBnB and after a lovely meal with Eddie and Cindy we retired for the evening.

During the night we heard the wind getting up and rain too, it was forecast however nothing could have prepared us for what was coming. At around 7:00 in the morning the phone rang from Eddie “get up here quick, the awnings about to blow away”, he sounded serious so we skipped breakfast and shot up to the circuit. The wind and rain was torrential, blowing the van all over the road on the way up to the track. On arrival it was like a scene from bomb site, with people running around, holding on to awnings, tents flattened awful conditions.

As it turned out where we had erected the awning surrounded by vehicles had worked in our favour sheltering us from the full force of the storm. However there were lots who were less fortunate.

There was an announcement over the tanoy practice was suspended until further notice, no big surprise there then! We were due to have a free practice then two 20 minute qualifying sessions, that now looked unlikely, in fact at this point in time everyone thought the whole event was going to be cancelled. Every hour the organisers would do a track inspection but would report the same news, due to high winds racing was again suspended. Fanally at around 3 in the afternoon the seemed to be a break in the weather, it was still bad but they allowed us all out for a free practice session, I only did 2 laps and called it a day, for me it was dangerous. The wind would blow the bike off the track at any time, at full speed you had no real idea where you were going to end up, for me that’s no fun at all. I went up to see the clerk of the course and said what I thought. Always a difficult situation for them but it was decided to carry on with the day.

We now only had one 15 minute qualifying session to get a grid spot so I went out and pushed as hard as I felt was safe returning to the pit lane after 5 laps. Surprisingly I was on pole for most of the session, Phil Atkinson stopped next to us and asked about the times as he had no pit board, I told him he was second behind me and not to bother trying any harder, but Phil is a proper racer and wasn’t having that and went out for a few more laps going slightly faster to take pole away from me.

I was happy in second with Ian Simpson third and Ant in fourth for tomorrow’s races.

The forecast looked grim in the morning so we decided to skip free practice as there was nothing to gain by going out.

Once again arriving at the circuit it was very wet and still blowing a gale, everyone I spoke to said it was really bad but it looked like it was improving steadily throughout the day. By the time it was our first race time the rain had stopped and due to the wind it was damp but the wind was still the main issue.

The race was stopped on the first lap with Jean Paul Lecointe crashing at Rocket 2, without injury, and after a short delay was set off again. I made a good start and was up behind Ian going onto the back straight for the first time.

Ian was riding well but I managed to pass him a few laps later with Phil hot on my heels.

The weather was changing lap by lap with showers at times meaning each lap was different. I led for the next 3 or 4 laps but Phil passed me on to the back straight.

I was keeping an eye on my pit board which was telling me where Ant was so I was happy enough to follow Phil round as he wasn’t scoring points. After a few more laps Phil slowed as the conditions detreated and I passed him, I wanted to maintain my pace to keep Ant behind me. We were pulling steadily away from Ant so when Phil once again passed me I decided not to chase him but to settle for second and maximum points for race one.

It wasn’t a lot of fun out there, very slippy at times and with the wind trying to take you off the circuit at every chance we all were glad to see the chequered flag.

By the time race two came around the sun was out and the wind although still very strong had eased, the surface was almost dry so we all knew race two was going to be faster.

Red light out and we all screamed into turn one,  Phil made the hole shot Ant second and me third, I didn’t want Phil to get away so I quickly passed Ant but was also passed by hard charging Mike Hose, however I managed to slipstream him down the back straight and out brake him into rocket to get up behind Phil again.

I followed Phil for a few laps but felt I could run faster in the better conditions so overtook him and lead for the next 5 or 6 laps. Once again I was keeping an eye on my pit board to see where Ant was, he obviously was having a battle with Mike Hose and Neil Watson as he was down in fifth place for ages, the two riders he was battling with weren’t scoring point either which meant he was still in a second place scoring position but frustratingly couldn’t do anything about the now huge gap Phil and I had built up. Phil was as ever keen to win so when he past me with about 4 laps to go I saw I had around 15 second gap to Ant I backed right off and once again settled for second place. It was a little frustrating as I felt I could run with Phil and make a good race of it however there was a lot more to loose than there was to gain by pushing for the win.

It was overall the best result I could have asked for and something I really didn’t think would have been possible at the start of the weekend with the weather conditions.

To be honest I wasn’t looking forward to it but after the event now the points deficit is down from 16 to 6.

Hockenheim is next on the calendar, I’ve been there recently to record a circuit guide so I’ve been able to get myself some invaluable circuit knowledge which I hope to make the most of in September.

Be the first to comment on "ICGP R.3 Anglesey"