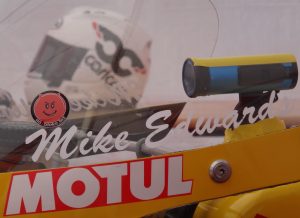 Next round of the ICGP Championship was at Hockenheim, I had a run round in June for a bit of a circuit knowledge refresh, as the last time I’d ridden there was back in 1998 when I was doing German Pro Super bike, but being so long ago it was a dull and distant memory.

Arriving at the circuit Thursday evening we met the team that had already set up the awning and were ready for Friday Qualifying. Eddie and Ally had been working hard on the bike and with new expansion chambers to tryout we were positive the bike was going to be 100%.

The weather forecast for the weekend was overcast Friday but due to rain very hard Saturday and Sunday. Thursday evening it rained very hard so I was secretly hoping that the weather forecast was going to be faithful thankfully on the drive to the circuit Friday morning it was lovely, warm and dry, perfect for racing. We were due out on track for qualifying session at 12:35 which gave me plenty of time to wander around the paddock saying hello to my friends and competitors. The ICGP riders are great bunch of people, I like to think of as my racing family.

However 12.35 soon came around and we were called up to the warmup area ready for our session. I quickly found my feet managed to get through the group of riders that were in front  and managed to string a few good laps together, when I came into the pits to adjust the bike I was in fact in pole position time of 1:13.64 just over a second in front of Ant Hart the Championship leader, with Ian Simpson in third.

The bike felt good apart from the rear suspension was chattering on the corner entry braking, so I suggested altering the rebound settings and the gearing needed altering one tooth. In the meantime Eddie suggested I should have a run out around on the spare bike just to make sure it was ‘race ready’ should we have have an issue with the other bike.

I knew the spare bike had cold, new tyres on and thought to back off the pace as I left the pit lane, and thought I was riding around slowly enough for it be okay. Unfortunately, coming in on one bike from pole position pace, it wasn’t quite slow enough and as I came into the stadium section I managed to highside bike on the fast left-hander.

I landed very hard, and knew straightaway that my left wrist was sore, you never think it’s broken at the time but this time I had a secret suspicion it was.

The medical staff were very quickly on the scene and whisked me to the medical centre where the doctor inspected my wrist and suggested I go to the hospital for an x-ray.

Everyone was very disappointed, me included that I had made such a rookie mistake and were keeping their fingers crossed that the doctor suspicions were wrong.

George took me in his van to the hospital, where after queueing and waiting for several hours the X-rated in fact showed a break in my radius and left metacarpal. It was suggested that I have some traction to align the bones in my wrist before a half cast was placed on my arm, I haven’t had traction before and now don’t ever want it again, but unfortunately it’s a necessary evil and turned out to have been the correct procedure. 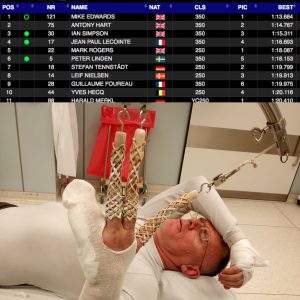 Arriving back at the circuit arm in cast everybody gathered round to see what I’ve been up to and how serious the injury was. For me at this point, it was very disappointing as I knew now that the championship chase was over. I was only six points behind Ant and only needed a few good results to take the lead and championship title, but now there was no way I could ride.

Ant was one of the first people to come over to see how I was, he now knew he just needed a couple of reasonable results to clinch the Championship but being the nice lad he only wanted to know was how I was.

Jennifer and I were supposed to fly to Texas on the following Monday so we have to make some hasty plans and try to reschedule our flights. After a few hours on Saturday morning emailing and trying to ring everybody it was clear we were not going to be able to change our flights, so decided for me to go back to London with Jennifer, she flew onto Texas and I flew on home to Harrogate where I could then go and see the specialist about getting my arm repaired.

The next couple of days in Germany were bittersweet, good to see my friends racing but also knowing I had no chance to win the championship. Even if Ian Simpson won both races all Ant had to do was finish inside the top 10, but he finished a close second in both races confirming him as the 2018 ICGP Champion.

When I arrived back in Harrogate Monday afternoon I went straight to A&E, and our consultant hand specialist Mr Powell Smith organised a CT scan which showed the break in my radius was much worse that the x-ray had shown in fact I had three breaks all of which needed plating to repair it.

Mr Powell Smith said I was lucky as he had a clinic of the following day and he would fit me into the schedule and fix the breaks. He also said due to the fact I have arthritis, he didn’t want to immobilise my wrist in a cast the 6 to 8 weeks so screwing and plating would be the best option. This way, post op in an elastic support, I can take it off for physiotherapy as soon as possible.
A very disappointing end to the Championship and my 2018 season.

My injury has had a knock-on effect with me having to cancel our trip to Texas, reschedule a couple of coaching clients and miss out on something I was especially looking forward to, riding ‘Frank’ my old R1 at Portimao.

Will keep you posted on how things are going…